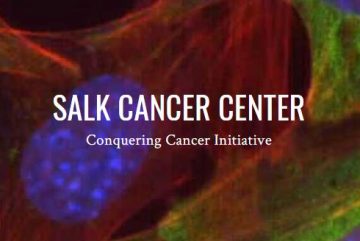 Following in the footsteps of our founder Jonas Salk, this institution has never shied away from daunting challenges or outside-the-box science. Today we are joining with forward-thinking individuals who have the same dedication to seeing serious illnesses defeated once and for all. Salk’s researchers will combine foundational biological research with advanced biomedical technologies to overcome hard-to-kill tumors, keying in on the five deadliest cancers: breast (triple negative), brain (glioblastoma), pancreatic, lung and ovarian.

The knowledge and therapeutic approaches that emerge from these efforts will provide a powerful set of tools to treat a broad array of cancers, not just the five targets but also many others. Our vision is to make current generations the last to ever see cancer as anything more than a diagnosis.

Some cancers can be effectively treated, especially if detected early, and others are now more akin to manageable chronic conditions thanks to advances in medicine. There remain five types that have failed to see similar improvements in overall survival rates.

Choose one of these two simple options to get your program listed on CRCERA:

It's free to be listed, and your post will reach everyone in our community of cancer researchers in San Diego.

The CRCERA Newsletter comes once a month and includes a list of the latest training opportunities. Don't miss out - sign up now!